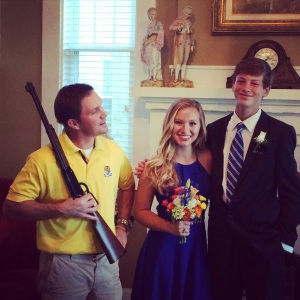 I knew I had it easy last July when the girls working in Maggie Lee’s Closet talked about ordering homecoming dresses. Several dresses. Since I am way out of the girl loop this was news to me. As one known for changing clothes and hairstyles five times before heading out the door, I get it. But, with me, its more about camouflaging the pear shape and parting my bangs strategically to cover the forehead acne I’m getting 30 years later.

So even before the last trip to Rosemary Beach, homecoming dance preparation for some girls had begun. When most high school guys were in baseball tournaments, mowing grass, or fishing, girls were finding the perfect dress for the October night. No wonder guys have had to get more creative in the way they ask a date to this dance. Girls are invested. The least a guy can do is spell out homecoming? with cupcakes, a pizza or in Jack’s case, in the fresh mud on his truck.

With plans–picture pre-party, dinner, dance and post-party breakfast–coordinated, the day arrived. What I had not planned on was the opening of squirrel season Homecoming Dance Saturday. While girl moms posted manicure, hair, and makeup preparations on Facebook, the scene over here with Davy Crockett was a little different. I could have chronologged Jack’s various stages of homecoming dance preparation: donning the camo, prepping the pellet gun, and peeling out in high gear on his John Deere.

Since the picture session with his closest 30 friends and their dates was at 5:30 and we had to gather his date and be back across town, I asked him if he could shower by four o’clock. I was running errands so I called a little after four just to make sure he was in forward hygienic motion.

“Hey Jack. Have you showered?”

“Almost?” I asked in a puzzled tone.

SKINNING A SQUIRREL AN HOUR BEFORE HOMECOMING PICTURES?

So I race home. Thankfully he is running water as I pray he uses the nail brush. He jumps in the suit and I drive us to his Bailey’s house where I am again struck by what the sportsman’s paradise our state is. Bailey’s Dad answered the door and welcomed us inside. Down from the stairs comes beautiful Bailey, a vision in royal blue. I joked around about a picture I had seen of a Dad and brothers with shotguns and the caption “Ready to meet the girl’s date” Bailey nonchalantly mentioned, “Oh, I have a .22 under my bed.”

My face had a confused look of, “Wait. What?” While the squirrel hunter’s countenance exclaimed, “That’s hot.” Dad shot up the stairs, got the firearm and we grabbed a photo. My absolute favorite of the night. To no one’s surprise these high school girls looked utterly amazing. And the boys, well, after you rinse off the varmints, dress them in a suit and pin a flower on, they clean up pretty well, too.

A writer with the soul of an awkward middle school girl. I’m a writer, a reader, a comic, a wife, a mom and a follower of Christ. View all posts by jinnyhenson

2 thoughts on “The Glory of a Boy: Homecoming Prep Edition”