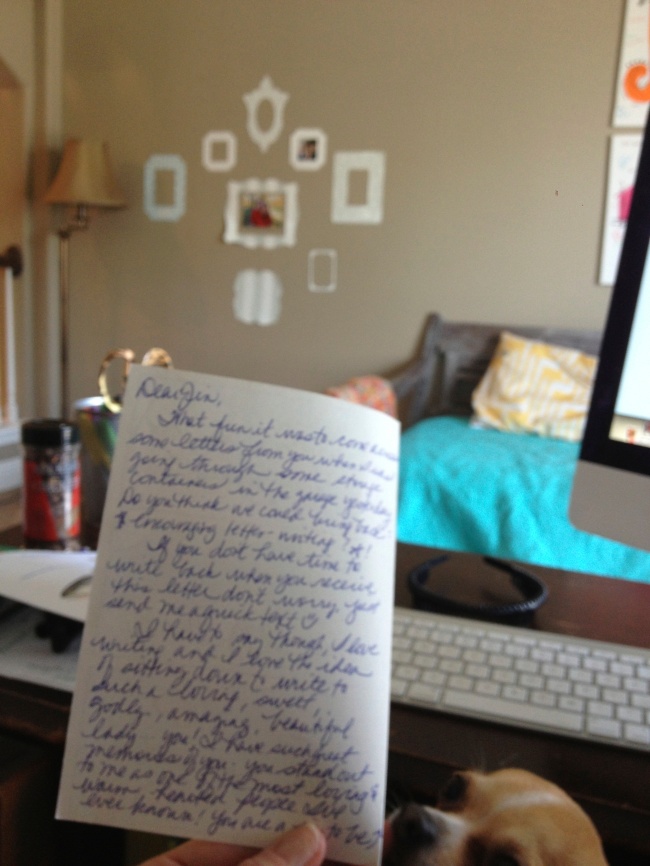 My first thought when I held the envelope was that this was one of those sales ads with handwriting font posing as a personal letter (You know those heart breakers:  Pizza Hut coupons hiding deceptively in an envelope.) But when the sticker- adorned flap caught my eye I realized that this was no Big Lots Buzz Club circular but rather an actual letter.

Three weeks ago my friend Elisa stumbled upon a storage tub of old papers.  A few layers deep in the polypropylene time capsule were notes from me.  After reading the decades-old sentiments she decided to go retro and write to me.  In this letter she challenged me to join her in bringing back the art of letter writing.  I immediately texted her that this idea didn’t have legs.

No, actually I wrote Elisa and it felt pretty great.  So great in fact that I wrote seven more epistles to cherished friends.  All the while I wondered why something so gratifying had fallen out of Vogue.  Here are my thoughts:

1. Too much equipment is needed.

School just started so we are flush with composition notebooks and Bic pens now but just wait til November and I’ll be scratching my grocery list on the back of a crumpled Target receipt with a jagged eyebrow pencil. One in need of a go with the sharpener no less.  Since dirty blonde Kohl Kajal does not an impressive correspondence make, I tend to skip the personal letter.  In my alternate universe I have a marvelous stationery wardrobe bursting with monogrammed Crane notecards so thick that one could dislodge a filet mignon shard from one’s 1st and 2nd Premolar.  In reality I lack the essentials to communicate anything greater than “this notepad is being used only because it was too large to get sucked up in the neighborhood car wash vacuum and bent in the middle because I unsuccessfully tried.” Not to mention securing the postage stamp, a veritable field trip in itself.  It seems the impractical hassle of securing the proper equipment prevents me from writing letters more often.

2. It takes too much time to string together sentences into a coherent communique.

Not that this will scroll across the bottom of Brian William’s desk tonight as breaking news but writing a letter takes time. The act of composing a note requires not only an actual pen but an unhurried chunk of time to properly write, rewrite and un write.  Not since the second grade have I ever been remotely pleased with a first draft of anything I have composed. Self-awareness blows. I have penned entire three-page letters only to notice at final review that my vacillation between cursive and print s’s made me come off like a dysgraphic Sybil.  The opening greeting matters, the penmanship matters and obviously the content matters. Certainly a personally written note requires more profound contemplation than that which is needed for a flippant text. Tufts cognitive neuroscientist Maryanne Wolf states that “It takes time to think deeply about information and we are becoming accustomed to moving on to the next distraction.”   While text messages are perfect for relaying short bursts of vital info like, “U sure its ok 4 Jack & Pat 2 filet catfish unsupervised?” as John Ortberg says, “We cannot listen or love in a hurry.” I would also add that neither can we write a letter in a hurry.

It seems so archaic to send a message through the postal system with so many other correspondence venues at our finger tips. Kind of like choosing to ride on an Amish buggy when a Bullet Train is readily available.  Email and text messages offer the recipient the option of instant response and even futuristic George Jetson-like face time is an option for those desiring visual as well as verbal communication feedback. Not sure about which shirt to buy at Old Navy? Put pictures of both of them side by side on Instagram (via Instacollage) and let your friends vote on their favorite. #crucial decision. Have something witty to tweet about Miley Cyrus? Something profound like “Don’t judge a man’s daughter until you’ve walked a mile in his mullet.” Launch that nugget out there and most likely someone will give you their thoughts on your tweet. Immediately. We’ve become spoiled rotten by swift feedback from Face book posts and people’s knee-jerk repins of our pins on Pinterest boards. No wonder the effort to write a letter for an audience of one which may take weeks to be acknowledged seems to us a poor ROI.

Strangely enough today when I checked the mail I received another hand-written letter. This one from a lady my mom’s age who lost one daughter in her 40’s to breast cancer and whose other daughter is now battling the very same disease. At the end of her note she told me that I didn’t have to write her back but that I could email her if that were easier for me.  Yet since I’m warmed by this tangible treasure in my hand, sentiments written and rewritten in ink on stationery and everything, a response in kind seems only fitting.  Plus I have all of these stamps and it’s not like they will last forever.